You asked: Dinosaurs survived when CO2 was very high. Why can’t humans?

“you askedIt is a series in which the experts of the Earth Institute answer readers’ questions about science and sustainability. A reader contacted us with this question: “How did plants and animals survive about 200 million years ago, when carbon dioxide concentrations reached 6,000 parts per million?” Paul Olsengeologist and paleontologist at the Columbia School of Climate Lamont-Doherty Earth Observatoryguided us through what scientists know about carbon dioxide levels over time. 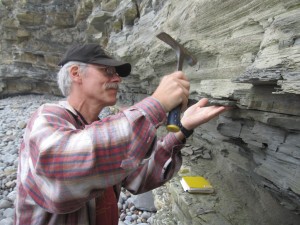 Although no one was around to measure atmospheric carbon dioxide concentrations millions of years ago, paleoclimatologists can reconstruct past temperatures and carbon dioxide levels using ice cores, tree rings, corals, ancient pollen, and sedimentary rocks. These natural recorders of climate fluctuations can also show how different animals and plants have flourished or died out during different geologic periods.

For example, while studying the Age of Dinosaurs, some researchers dissected leaves that were trapped in sedimentary layers. Small holes in the bark of leaves are more common when there are lower carbon dioxide levels, Olsen explained.

Scientists like Olsen have repeatedly found that during several periods of Earth’s history, organisms experienced much higher concentrations of carbon dioxide and warmer average temperatures than today. However, this does not mean that everything will be fine if we heat the planet by burning fossil fuels.

“The problem today is not just higher global temperatures or carbon dioxide levels. Olsen explained that the problem is the speed of change. During most of Earth’s history, carbon dioxide levels have generally changed very slowly. This gave organisms and their ecosystems enough time to adapt to climate change through evolution and migration.

Climate scientists warn Over the next century, the rate of change will be 10 times faster than any climate pattern that has unfolded in the last 65 million years. Due to the rapid rate of warming today, up to 14 percent of all plants and animals on land may face extinction in the coming decades. Report From the Intergovernmental Panel on Climate Change.

During the Cambrian Period, which lasted from 542 million to 485.4 million years ago, some sources estimate that CO2 levels may have been around 20 times more compared to today and the temperature was 10 degrees Celsius warmer.

Living things didn’t seem to mind the scorching conditions. During this time, the oxygenation of the oceans led to an explosion of life known as the Cambrian explosion. There was a diverse range of marine creatures such as trilobites, including larger ancient predators Anomalocarisand snail-shaped animals with shells. Meanwhile, on land, primitive plants began to take root 500 million years agoIt probably enjoys high levels of atmospheric carbon dioxide, Olsen said.

During the Ordovician period (about 488.3 to 443.8 million years ago), sea levels were as much as 220 meters higher than today. The areas north of the tropical belt were under the ocean. primary fish Red algaeCorals and a few other marine animals such as cephalopods and gastropods were part of thriving ecosystems – until they encountered an unprecedented tragedy that may have been caused by sudden changes in CO2 levels.

This was Earth’s first great extinction. Beginning about 443 million years ago, it wiped out approximately 85 percent of all marine species. Up to two million years. The cause remains unknown, but some scientists speculate that it may be related to the formation of massive glaciers and a sharp drop in sea levels after the supercontinent Gondwana moved toward Antarctica. A 2012 study suggested that the first land plants may have caused a drastic drop in global temperature by absorbing CO2 and started the Ice Age. On the contrary, in A Study 2020Canadian scientists hypothesize that massive volcanic eruptions released large amounts of carbon dioxide that suddenly warmed the planet and triggered two pulses of mass extinction within two million years.

How did dinosaurs survive despite extremely high levels of CO2?

The Triassic period (252 to 201 million years ago) ushered in the age of dinosaurs.

“At that time, it was very warm because the concentration of atmospheric carbon dioxide was five times higher than it is today,” Olsen explained. However, marine and land life was thriving.

At the beginning of the Triassic period, the supercontinent Pangea covered the land of all seven continents today. Mammalian reptiles or synapsids dominated the world. frogs And salamanders After this, a wider range of archosaurs—a group of reptiles that includes crocodiles, birds, and dinosaurs—took control.

The first dinosaurs appeared about 232 million years ago. They were the size of small dogs.

For the Late Triassic and earlier Jurassic (roughly 237 to 174 million years ago), scientists found evidence of polar ice sheets in the fossil record—probably the result of carbon dioxide levels that may have reached 6,000 parts per million. During this greenhouse state, dense coniferous and deciduous forests covered most of Pangea from the Arctic and Antarctic to subtropical latitudes.

However, around 230 million years ago, Pangea began to break up. As North America drifted away from Eurasia and Africa, magma penetrated the Earth’s crust on a large scale, creating one of the most significant volcanic eruptions in Earth’s history. 202 million years ago caused a mass extinction event that wiped out 80 percent of all organisms, including many types of previously dominant Triassic large tropical reptiles, such as crocodile-like phytosaurs.

According to Olsen, most researchers believe that the end-Triassic mass extinction event was directly related to massive volcanic eruptions. Each eruption may continue continuously for tens or even hundreds of years, and there have been many eruptions. They were accompanied by a sudden doubling of atmospheric carbon dioxide in a short period of time.

“It’s quite comparable to what humans are doing to the planet now,” he said. A 2019 study found that human activity is increasing annually 100 times more carbon in the atmosphere relative to volcanoes

High levels of carbon dioxide 202 million years ago led to ocean acidification and anoxia, or loss of oxygen underwater. Olsen and his colleagues identified these factors as the biggest drivers of this major mass extinction event that decimated marine invertebrates and corals.

In a A recent studyThey found that large amounts of sulfur dioxide are also pumped into the atmosphere during various pulses of volcanic eruptions. This caused intense, albeit brief, cold periods as sulfur aerosols reflected sunlight into outer space.

“That cold period could last as little as a few years or as long as 100 years,” Olsen explained. On land, volcanic winters killed animals that lacked insulation such as feathers, fat, or thick layers of fur. Dinosaurs with adequate insulation survived and dominated.

After each short cold period, Earth experienced tens to hundreds of thousands of years of global warming due to sudden increases in atmospheric carbon dioxide levels caused by eruptions.

How did global temperature and CO2 levels stabilize before humans arrived?

Very high concentrations of carbon dioxide disappear from the atmosphere through three main mechanisms. The first is that the ocean absorbs large amounts of it to balance the atmosphere.

Earth’s second mechanism for sucking CO2 from the air is through the weathering of rocks. The products of this type of natural carbon sequestration reach the oceans as limestone.

The third mechanism is photosynthesis. Plants absorb carbon dioxide, and if they are buried in sediments before decomposing, the carbon in their tissues is stored underground. These three mechanisms occur slowly over several thousand years.

“But when the Earth experiences rapid changes in atmospheric carbon dioxide concentrations — such as we’re experiencing today due to human activities — these three mechanisms don’t respond quickly enough to compensate for the dramatic rates of change,” Olsen explained. do.”

Over the past 60 years, the annual rate of increase in atmospheric CO2 has been 100 times faster than a relatively recent natural increase that occurred about 17,000 years ago at the end of the last ice age. In 2021, the global average CO2 concentration reached its highest level on record 414.72 ppm.

Can humans survive the same hostile climates as the dinosaurs? 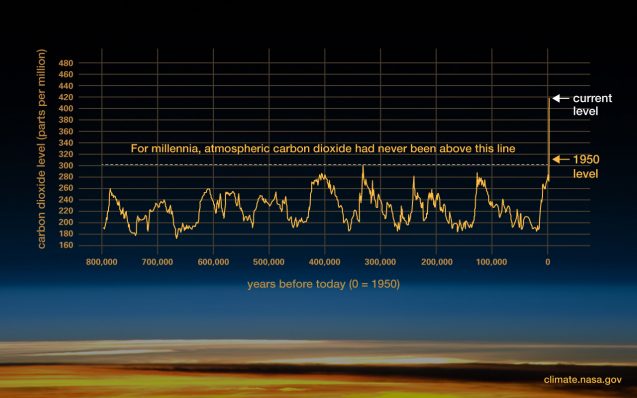 Carbon dioxide levels are higher today than they were 800,000 years ago. Image: NASA

Although the Earth has seen countless fluctuations in carbon dioxide levels in the past, most of them have been at a rate that organisms have been able to adapt to and evolve with climate change. This is less likely with today’s rapid rate of warming.

“The rate of change we’re experiencing today due to human-caused greenhouse gas emissions is one of the highest the Earth has ever seen,” Olsen says. High levels of carbon dioxide in the atmosphere are normal for our planet. Our current low is unusual. However, it is the rate of change that is most important.”

Olsen hypothesized that even with extremely high atmospheric CO2 levels of 6,000 ppm recorded during the age of the dinosaurs and subsequent global warming, humans could potentially survive—thanks to technological advances, not evolution.

And even if the interior regions of the continents are unbearably hot, places at higher latitudes may still be cool and habitable.

However, with high rates of climate change over short periods, Olsen warned that there would be significant social disruption due to limited food and water resources – leading to war and conflict.

In other words, our species could theoretically survive, but we probably wouldn’t live our best lives.