The energy crisis is affecting billions of people around the world. Due to skyrocketing electricity prices, electricity in homes and businesses is becoming more expensive.

However, the current crisis has Accelerate the push for renewable energywhile countries Worldwide efforts are being made to develop safer and more sustainable energy sources.

This has consequences for creating new jobs in renewable energy. Global employment in the sector grew by 700,000 from 2020 to 2021, reaching 12.7 million, according to the International Renewable Energy Agency (IRENA).

it is Renewable Energy and Jobs: Annual Review 2022 The report, compiled in collaboration with the International Labor Organization (ILO), shows that countries More and more are creating jobs in the renewable energy sector. It said this increase in employment could increase global employment in renewable energy to more than 38 million by 2030.

Solar photovoltaic (PV) has provided the largest share of renewable energy jobs at 4.3 million, hydropower and biofuels at 2.4 million each, and wind power at 1.3 million. Sub-pumps and ocean energy create the remaining job growth. 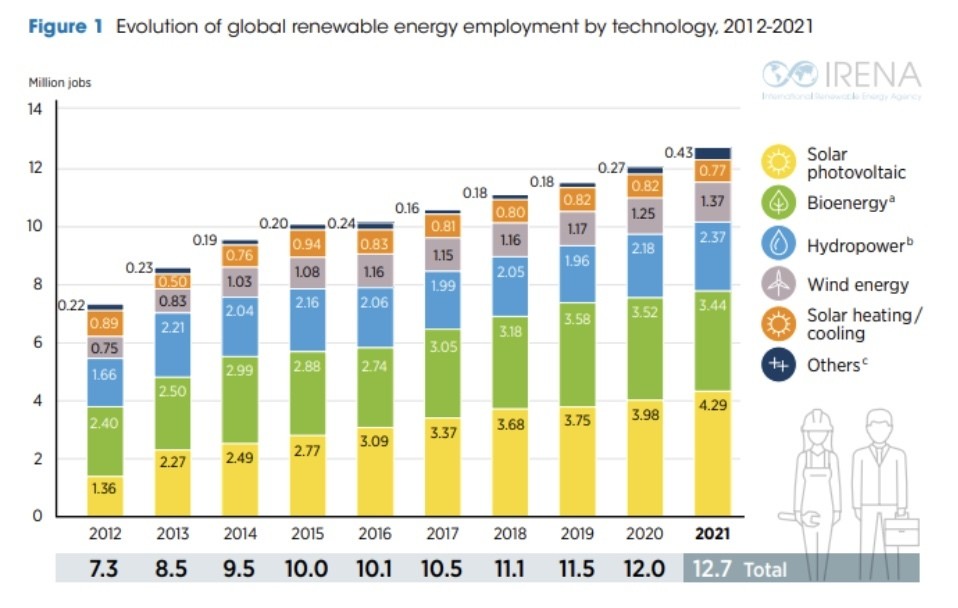 More than 5 million renewable energy jobs have been created in the last decade. Image: IRENA

Nearly two-thirds of these jobs are in Asia, according to IRENA, China leapfrogs the country as the country with the largest turnover of employment. representing 42% of all jobs worldwide. This was followed by the EU and Brazil at 10 per cent and the US and India at 7 per cent.

The majority of jobs in Africa remain in the general energy sector, the report said. As the region accounts for only about 1 percent of the world’s installed solar and wind power generation capacity, however, it indicates that job opportunities are increasing in the region. This is called decentralized renewable energy. 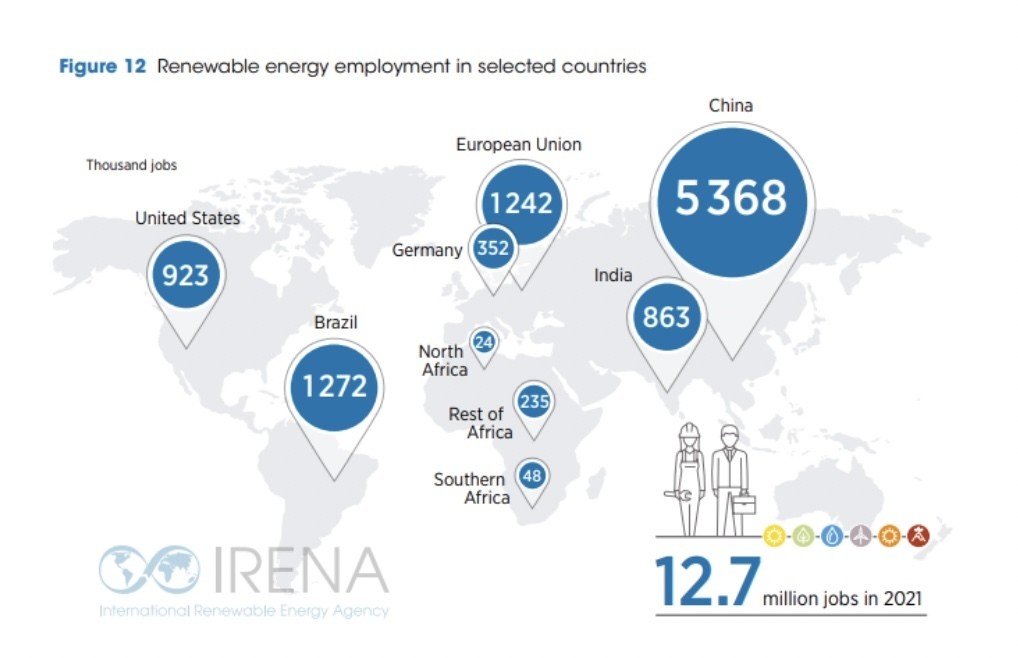 The majority of renewable energy employment will be in Asian countries in 2021. Photo: IRENA.

According to the report, approximately 257 gigawatts (GW) of renewable electricity capacity will be installed globally in 2021. Cumulative capacity is up 9 percent, with photovoltaic and wind power accounting for 88 percent of this expansion.

Most of the new capacity is installed in China. That’s half of new wind power installations and 40 percent of solar power. of the world added record solar and wind capacity by 2021. 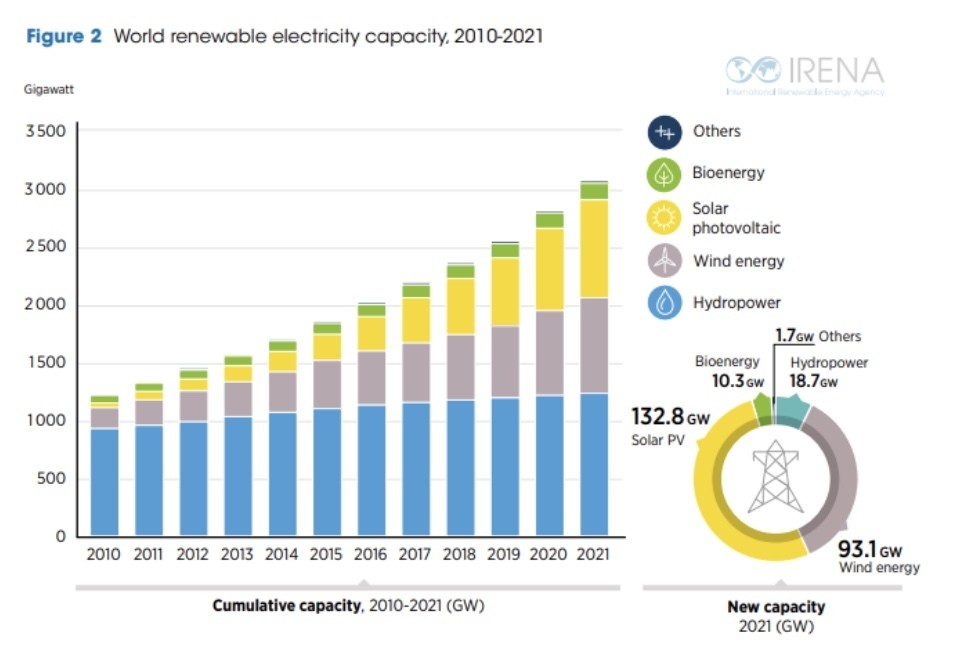 Asian countries provide 79 percent of the world’s solar PV jobs, adding an estimated 300,000 to 4.3 million jobs from 2020 to 2021. This reflects the region’s prominence in manufacturing and manufacturing, according to the report. The remaining jobs were in the Americas (7.7 percent), Europe (6.8 percent), with the rest of the world accounting for 4.9 percent of total jobs.

The report states that “The vast majority of global solar cell production takes place in China. It is backed by a number of government incentives. However, two-thirds of China’s total PV production was sent overseas in 2020. In contrast, The EU imported 84% of the solar panels installed from 2017 to 2021, the US imported 77% and India 75%. 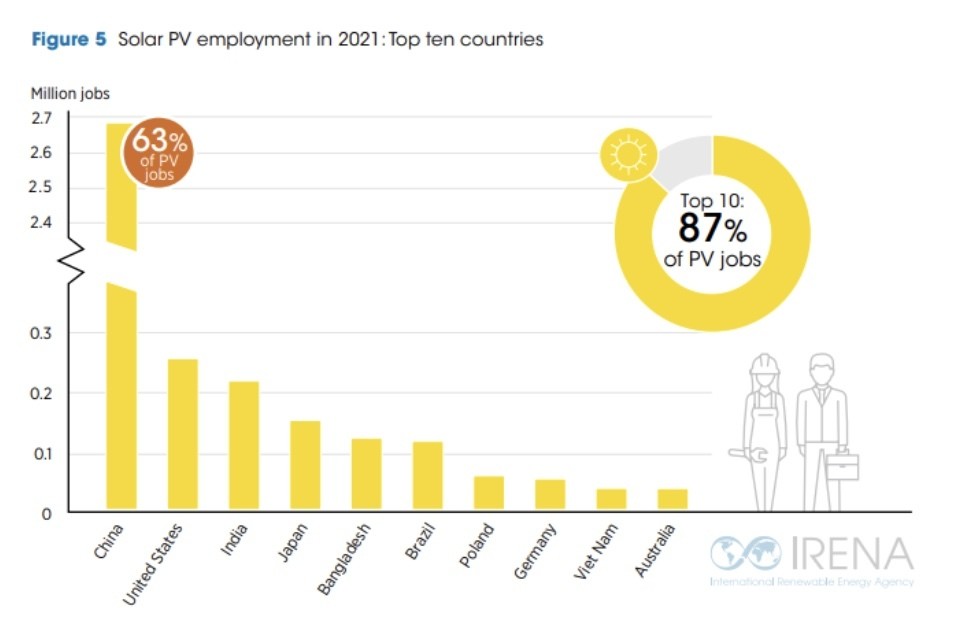 China provides the majority of jobs in the solar sector. Image: IRENA

Global employment in this sector increased from 1.25 million jobs in 2020 to 1.4 million the following year. Although Asia accounts for 57 percent of the global total, But China accounted for the majority (48 percent), Europe (25 percent), and the Americas (16 percent) making up the majority of the rest.

IRENA says Europe is a leader in offshore construction and technology development. Four European countries accounted for more than three-quarters of global exports in 2020, led by Denmark and Germany. Globally, approximately 2.3 million people are employed in this sector by 2021, with two-thirds of these jobs in manufacturing. Global hydropower capacity will increase by 25 GW by 2021, with China alone increasing to 21 GW.

China and India provide more than half of the world’s hydropower jobs, however, the report states that Ethiopia is responsible for almost 2% of global employment in this sector. This reflects the construction of Africa’s largest hydropower project. That’s the Grand Ethiopian Renaissance Dam. China and India host more than half of the work in hydropower. Image: IRENA.

Latin America accounts for 44 percent of all global biofuel jobs. Brazil is the largest employer of liquid biofuels. Asia provided 36 per cent of the jobs, with Indonesia, Thailand, Malaysia and the Philippines also having a large share of the workforce in this sector.

Ethanol comprises the world’s largest share of biofuel production. Followed by biodiesel and hydrotreated vegetable oil. The US and Brazil are the dominant ethanol producers in 2021, however, Indonesia is the largest producer of biodiesel. Making the future of work more inclusive and sustainable.

IRENA said the analysis indicates that the renewable energy industry has a better gender balance than in the general energy sector. However, more work needs to be done to promote women’s participation at all levels.

of the World Economic Forum Tomorrow’s White Paper Seeks to quantify the demand for green jobs in 10 countries, including those fostering greater social inclusion, by 2030. It urges governments and businesses to prioritize investment in these jobs. this and ensuring workers are paid fair wages as well. It’s a skill to grow.

The future of work is a topic on the agenda. Forum annual meeting in Davos in January

Are modular homes making a comeback?