On June 30, students from Columbia University’s MPA Program in Environmental Science and Environmental Policy took guided tours through the Gowanus Canal Superfund Site and the surrounding community. Led by Friends and Residents of Greater Gowanus (FROGG) guides and professors Steven Chilrod and Michael Musso, the Class of 2023 was led through one of the most contaminated sites in the country. 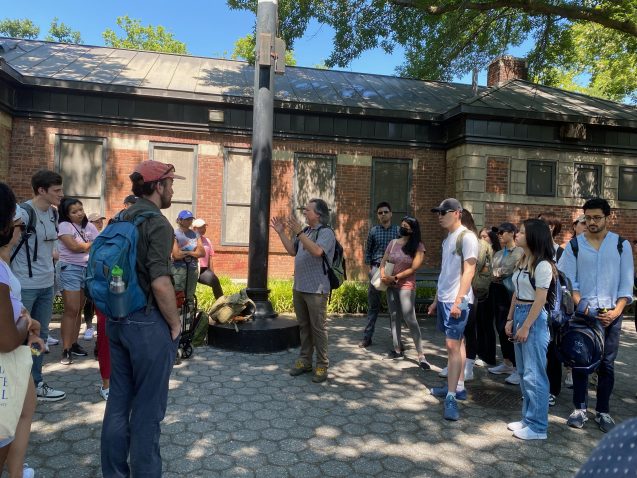 Professor Musso introduced the Class of 2023 with opening remarks about the background of the Superfund program at EPA and the Gowanus site in general.

The Gowanus Canal Superfund site stretches over 1.8 miles from Brooklyn, passing through the neighborhoods of Park Slope, Cobble Hill, Carroll Gardens, and Red Hook, and drains into New York Harbor. Built in the mid-1800s, the canal served as a major industrial transportation route. Gas plants, paper mills, tanneries, and chemical plants operated along this canal for decades, along with combined sewage overflows that Continue to carry Household sanitary waste, rainwater from storm drainage and industrial pollutants. Contaminants in the Gowanus include polycyclic aromatic hydrocarbons (PAHs), polychlorinated biphenyls (PCBs), and heavy metals including mercury, lead, and copper. 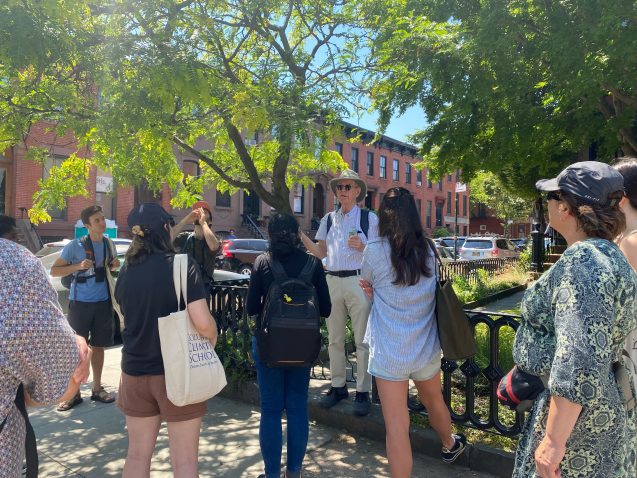 David, a tour guide from friends and residents of Greater Gowanus, presented the status of the Gowanus Superfund site as students gathered a few steps from his home.

Since March 2010, when the Gowanus Canal site was added to the National Superfund Priorities List, efforts to remediate the site have begun. A remedial investigation report was released in February 2011, followed by a feasibility study in December 2011 and a proposed remediation plan in December 2012. New York City and National Grid have been identified as potential primary responsible parties for this Superfund site. The plan, signed in September 2013, divided the canal into three sections, each of which would be dredged to remove highly polluted sediments. After dredging, the plan calls for replacing the contaminated sediment with clean material to restore the basin to its original state and covering any remaining contaminants so they don’t contaminate the clean material.

The Gowanus community, including FROGG tour guides, have been instrumental in advancing the EPA’s restoration of the Gowanus Canal. Nearly 200 people discussed EPA’s proposed plan and preferred solution at the public hearing, and 100 attended the second hearing.

While visiting Gowanus, Class of 2023 students learned all about the history and current status of the Gowanus Canal Superfund site. Additionally, the FROGG tour guides—David, Marlene, Miranda, and Mark—offered their perspectives as those who have lived through the Gowanus Reformation for nearly a decade. Students were also lucky enough to see remediation efforts in action, seeing dredging equipment and professionals actively working to restore the site.

As reconstruction continues, FROGG tour guides shed light on their latest community organizing effort: their opposition to a rezoning proposal that would add thousands of new apartments to the Gowanus. In February 2022, Voices of Gowanus, FROGG and area residents filed suit. strong opposition Rezoning Gowanus citing a host of associated health and safety risks as well as perpetuating pervasive environmental injustices. The lawsuit attacks the failure to comply with the National Environmental Protection Act and the National Historic Preservation Act and claims that the environmental impact statement associated with the rezoning of the New York State Environmental Quality Review Act, the Environmental Protection Act, and the Conservation Act Violates New York State. . However, Gowanus rezoning remains an ongoing issue facing the community. 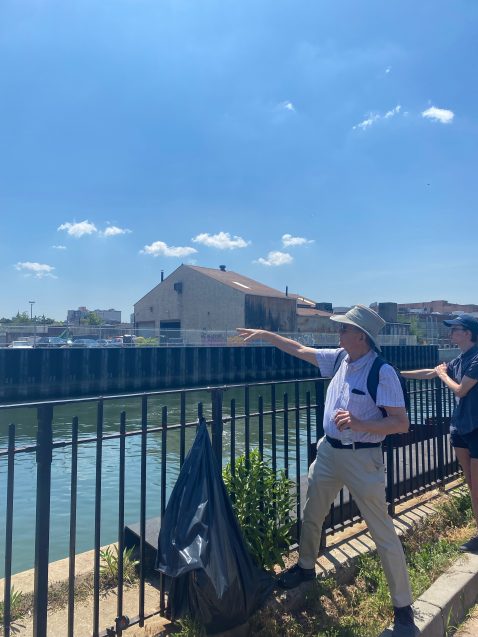 FROGG tour guide David points out dredging equipment across the canal while standing at the foot of the Gowanus Canal itself.

During the Gowanus tour, news broke of a recent Supreme Court decision West Virginia v. EPA, which limits the Clean Air Act and limits the EPA’s power to regulate emissions from existing power plants. The devastating news spread quickly through the group as they learned about the success stories of the reform. These students, as well as those who have come before and those who will follow, must now rise to the challenge and ensure that we continue to depollute, clean up our environment and support greener policies.

Annika Becker is a 2022 graduate of Columbia’s MPA in Environmental Science and Policy program.

Meet Victoria Hamilton from the Climate and Society Class of 2023