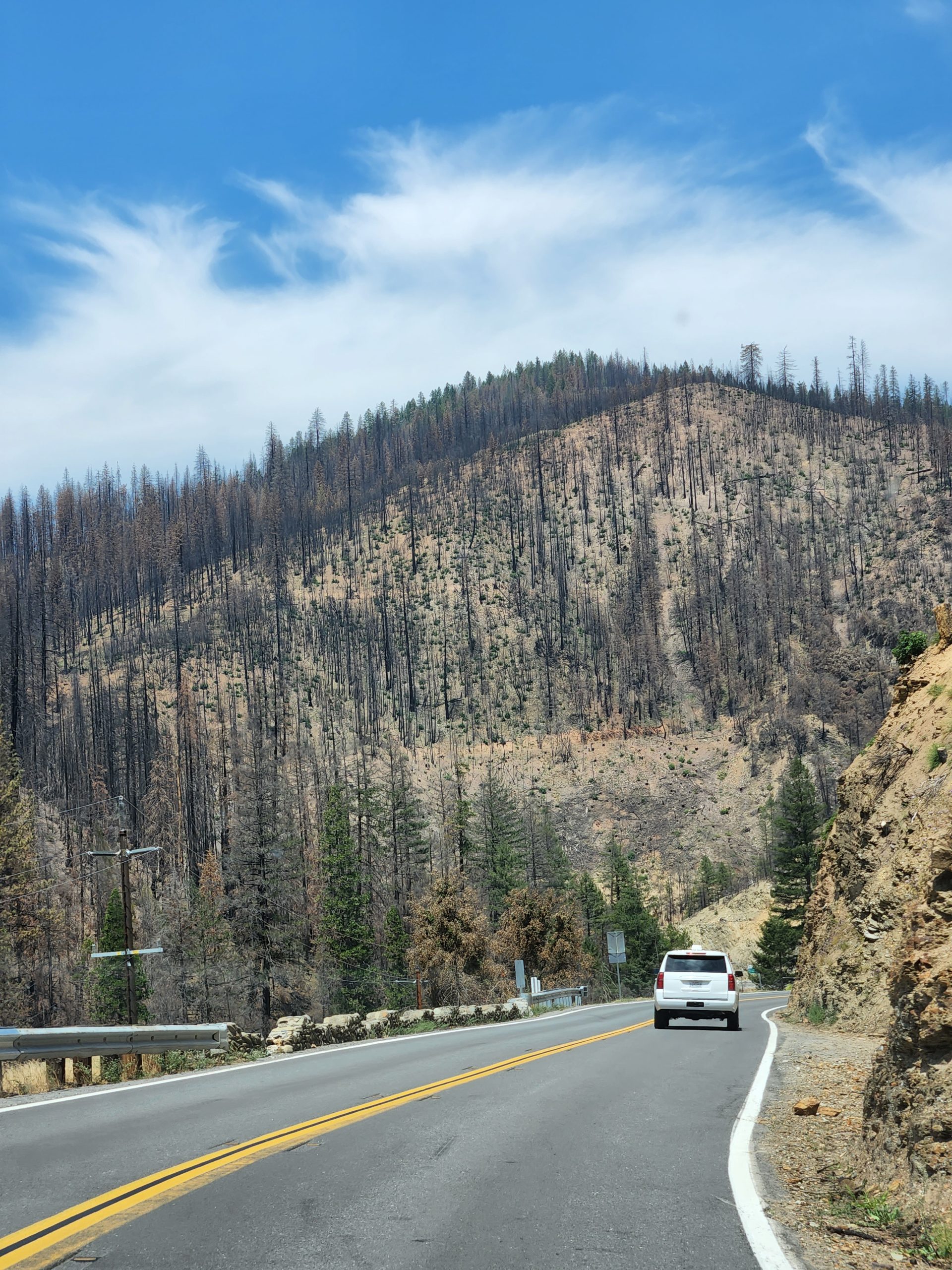 Deep in the Sierra Nevada Mountains, Greenville is a small town of about 1,100 in northern Plumas County, California. It was founded during the Gold Rush—a mining town turned lumber town turned historic landmark, well-preserved for its 19th-century storefronts and old plantations. That is, by the summer of 2021, put Greenville on the map for something else: a city devastated by the Dixie Fire.

Now, a year later, the community in Greenville is working to rebuild. On July 13, Columbia School of Climate experts National Disaster Preparedness Center (NCDP) visited Plumas County to help communicate their recovery efforts and co-host an in-person training, “Planning for Transitional and Long-Term Housing After a Major Disaster.”

The training was organized and implemented in partnership with the California Governor’s Office of Emergency Services (Cal OES), Plumas County Planning Department, Dixie Fire Cooperative and Federal Emergency Management Agency (FEMA). It is also coordinated by the FEMA State Department Education Point of Contact. It focused on providing additional resources to community stakeholders and emergency service professionals to facilitate post-disaster recovery, including implementing federal assistance and coordinating with external partners. The training was followed by a panel discussion with local and state experts.

A city in uncertainty

For Plumas County, the Dixie Fire was a worst-case scenario of exceptional drought, adverse winds and dry vegetation. The fire started when a tree hit a power line owned by Pacific Gas and Electric (PG&E). It took firefighters three months to put out, during which time more than a million acres of land had burned — an area larger than the size of Rhode Island. About 1,200 buildings were damaged, including more than 650 houses.

The NCDP team traveled to Plumas County the day before the training to visit some of the burn sites and talk to those still living in Greenville. The city itself is located in a fairly remote part of California, about a two-hour drive from Reno, Nevada. Little reconstruction has taken place in the past year, partly because building materials and manpower are not readily available. Many residents are also in limbo, waiting for a final resolution from PG&E before selling their property. Those who want to stay are struggling to learn the processes and documents necessary to qualify and access available disaster recovery funding from various sources.

He said: Disasters change the whole dynamics of a society Jeff Schlegelmilch, Director of NCDP and one of the training instructors. Greenville is trying to plan, but there are still many questions about what can be rebuilt and how.

Schlegelmilch described meeting one business owner in town who was further along in the process. On a picnic table, the man laid out all the different sets of paper he had to fill out—11 forms in all. Each form represented weeks and even months of work and waiting for signatures before the renovation could begin.

“It was one of the best visualizations of what a survivor has to go through and why we see such differences in coping ability,” Schlegelmilch said. “Those who have the most margins, those who have perhaps the fewest resources are being asked to do an incredible amount.”

The training that NCDP provides in coordination with FEMA is, in part, to help minimize the impact of bureaucratic burden on communities at risk of disasters by preparing communities before disasters strike. However, education in Plumas County was something of a departure from the usual NCDP process. Instead of equipping communities with the tools to respond to a the future He said: “The event of disaster, disaster has already happened – and is still happening.” Hannah Dancy, project coordinator at NCDP. The destruction of the forests near Greenville has also taken the infrastructure with it. The loss of vegetation has increased the possibility of landslides and floods. And survivors are dealing with the trauma of losing their livelihoods in real time.

The NCDP team was first approached about providing post-disaster training by Robin Cole, Cal OES Lead Housing Recovery Coordinator. He wanted to not only support recovery efforts in Plumas County, but also foster interactions between the counties affected by the Dixie Fire. With that goal in mind, Dancy worked closely with Cole and other local stakeholders to restructure an existing NCDP training model and ensure the right people were in the room to engage. Participants completed several course modules online before attending the in-person session, freeing up half of the day for a more specific discussion about the Dixie Fire and how to navigate its aftermath.

“The purpose of this course was really to create a discussion between people who are trying to restore these communities,” Dancy said. 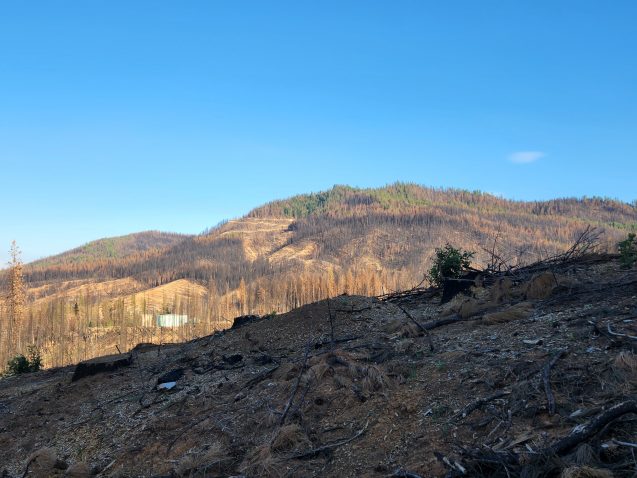 Rather than asking participants what they would do in the face of a hypothetical disaster, as is common in other NCDP trainings, facilitators asked participants about their current needs. Representatives from other recovering communities, such as Paradise, which was devastated by the 2018 Camp Fire, were also present and able to share their knowledge with Plumas County representatives.

“A lot of our role has been to understand the dynamics, be as supportive as we can, and then know when to step back so those conversations can happen,” the NCDP coach said. Vanessa Lindley.

One of Schlegelmilch’s favorite moments in the training was when Lindley presented a module on strengthening leadership in the community. Instead of explaining what the participants needed to do, he mentioned several people in the room who were already doing it — cheering and celebrating their commitment to Plumas County’s recovery efforts. At Greenville Elementary School, now surrounded by vacant lots and charred mountains, there was a reminder of what — and who — brought them all together that day.

A A whole community approach to recovery

With every training they organize, NCDP considers how to ensure that the intentions and resources provided by the federal government are realized at the local level.

“I’m always thinking: Are we leaving more value than what we’re taking?” Shelgul said her wish. “If the participants had this time to work with the papers on their picnic table, would it be time better spent?”

Schlegelmilch noted that the NCDP team received positive feedback after the training. The team quickly attributed that response to their partnerships with local and state emergency physicians, whose meaningful relationships with the communities they represent helped set the training up for success.

“Having decision makers, stakeholders and people with resources [in the room] Another element of hope and an opportunity to create solutions, Lindley said.

Multilevel coordination in Plumas County offers a glimpse of what an effective, whole-of-community approach to disaster recovery can look like. The training also highlighted the potential benefits of investing in disaster managers—designated staff who manage the logistics of the recovery process—and creating peer networks to exchange resources and first-hand experiences.

As climate change increases the frequency and severity of extreme weather, these types of support systems, as well as training like the one in Plumas County, will become even more important. “The disasters we experience in the future will be nothing like the disasters we’ve seen in the past,” Dancy said. “We need to focus not only on how we can rebuild communities faster, but also on how to protect them, make them more resilient, to minimize the process of rebuilding in the first place.”

The training was organized and implemented in partnership with the California Governor’s Office of Emergency Services (Cal OES), Plumas County Planning Department, Dixie Fire Cooperative, and the Federal Emergency Management Agency (FEMA). It is supported by cooperative agreements EMW-2019-CA-00049 and administered by the US Department of Homeland Security. The views or opinions expressed in this document are those of the author and do not represent the official position or policy of the US Department of Homeland Security.

Does air pollution make thunderstorms stronger? The goal of the project is to discover